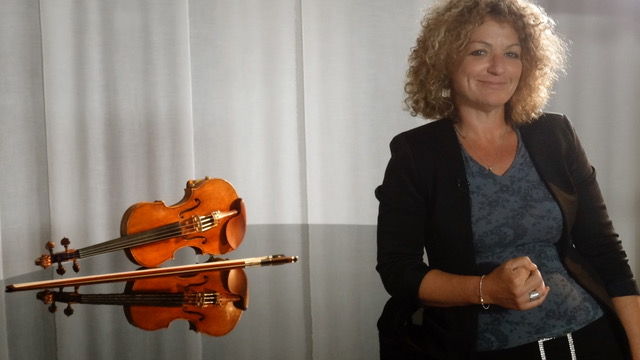 The Hotchkiss Concert Series is pleased to present an evening of chamber music with cellist Dmitry Yablonsky, violinist Janna Gandelman, and pianist Fabio Witkowski on Friday, Oct. 20 at 7 p.m. in Katherine M. Elfers Hall, Esther Eastman Music Center. The concert is free and open to the public.

The evening's program will feature duos and trios by Ravel, Grier, and Piazzolla. Mr. Yabolonsky is conductor laureate of the Jerusalem Symphony Orchestra, where Ms. Gandelman is the concertmaster. Mr. Witkowski is chair of the visual and performing arts department at The Hotchkiss School.

Grammy-nominated conductor, cellist and conductor Dmitry Yablonksy was born in Moscow to a musical family. He began playing the cello when he was five years old and was accepted to the Central Music School for gifted children. At the age of nine he made his orchestral debut playing Haydn's cello concerto.

Since then, his career had taken him to the most important stages in the world, such as the Carnegie Hall, La Scala, Moscow Great Hall, St. Petersburg Philharmonic Hall, Taiwan National Hall, Theatre Mogador, Cite de la Musique, and the Louvre, among others.

In 2010, Dmitry Yablonsky received the Diploma of the Honorary Academician at the Independent Academy of Liberal Arts at the Russian Academy of Sciences. He has transcribed and edited works for cello, which was released by International Music Company and Dover Publications. Naxos records released his recording of all 40 Popper etudes for solo cello in the fall of 2008, which received critical acclaim.

Perhaps his most important recording is of the Piano trio for Erato/ Warner with Vadim Repin and Boris Berezovsky, which has won numerous awards.

Dmitry Yablonsky has an enthusiastic and charismatic character and initiates many projects. He has organized many festivals all over the world and is the artistic director of Gabala Festival in Azerbaijan.

Dmitry Yablonsky is Music Director of Kiev Virtuosi and Conductor Laureate of Jerusalem Symphony Orchestra. Since fall 2016, he has taught at the Buchmann-Mehta School of Music at Tel Aviv University and has been recently named Head of International Relations of the same University.

After immigration to Israel in 1979, she continued her studies with legendary violin pedagogue, Professor Bondarenko, who was David Oistrach's assistant. Also in 1979 Janna was accepted to be a part of the most famous cultural foundations in the world, American-Israel Cultural Foundation, which promoted and still to this day promotes many prestigious cultural projects. As a member of this foundation, Janna Gandelman has performed in many countries around the world. During her studies in Tel Aviv Music Academy with Professor Kless, Janna has won many competitions as: Clearmount and Shapira in Israel, Lipitzer in Italy, Atlanta competition, just to name a few.

This fall she will record a violin concerto by Kara Karaev for the Naxos label.

Janna Gandelman has given master classes all over the world including: Russia, Argentina, Brazil, Norway and a special project in Israel called Polyphony, which brings Arab and Jewish students together through music.

Janna Gandelman is concertmeister of Jerusalem Symphony Orchestra and teaches at Jerusalem Conservatory Ha Sadna and Nazareth Conservatory, which is a project of Daniel Barenboim. She teaches at the Buchman-Mehta School of Music at Tel Aviv University.

Mr. Witkowski also performs regularly with his wife, pianist Gisele Nacif Witkowski as the Witkowski Piano Duo. In a recent collaboration with the Bowen McCauley Dance Company, the duo gave numerous performances of Igor Stravinsky's ballet The Rite of Spring, celebrating the 100th anniversary of the masterpiece. "Fabio and Gisele Witkowski played the four-hand piano arrangement as if they possessed the very paws of Fate", described the Washington Post. Mr. Witkowski holds a cum laude BM and MM from the Hartt School of Music, where he studied under the guidance of Luiz de Moura Castro. He is currently the Head of the Visual and Performing Arts Department and Director of the Music Program at the Hotchkiss School in Lakeville, Connecticut.

Mr. Witkowski has performed at the Tanglewood Institute, the Liszt and Wagner International Festival in Italy, the Prague International Piano Festival, Festival de Musica de Girona in Spain, and the Liszt Festival in Rio de Janeiro. He has appeared as a guest artist and professor in numerous music festivals, including the Amalfi Coast Music Festival in Italy, the Wintergreen Summer Music Festival in the USA, and the Ourinhos, Belém, and Londrina Music Festivals in Brazil. He is currently the co-director of the Hotchkiss in Florence Music and Arts Program in Italy and the artistic director of the Hotchkiss Piano Summer Portals in the USA.

Mr. Witkowski has been acclaimed by the critics as "One of Brazil's most promising talents," who "never fails to impress the audience," and whose playing "is able to conjure up the devilish colors of an inferno as well as portray an ethereal paradise..." According to the Hartford Courant, "Mr. Witkowski revealed himself as an accomplished pianist, providing many passages of bravura, sensitivity, and pearly agility".

The Esther Eastman Music Center celebrated its 10th anniversary in 2015. A LEED-certified building adjoining The Hotchkiss School's main building and completed in 2005, the Center is home to state-of-the art music facilities and the Katherine M. Elfers Hall — a breathtaking concert hall with world-class acoustics. The hall has become one of the area's main cultural destinations, offering student and guest concerts throughout the year, all free of charge. The guest concert series has welcomed an acclaimed roster of international musicians, including the Fine Arts Quartet, violinists Midori and Glenn Dicterow, cellist Robert deMaine, pianists Boris Berman, Olga Kern, Leon Fleisher, and Guarneri String Quartet, among many others.

Founded in 1891, The Hotchkiss School is a coeducational boarding school located at 11 Interlaken Road in Lakeville, Connecticut. Katherine M. Elfers Hall, Esther Eastman Music Center is situated in the lower level of the main building. For more information about this and other arts events at The Hotchkiss School visit www.hotchkiss.org/arts or call 860-435-4423.