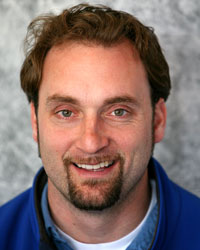 Mike Traggio '91 spent nine years as the assistant coach of the boys varsity hockey team, and manager of the Mars Athletic Center at The Hotchkiss School. In 2011, he took over as head coach of boys varsity hockey. Prior to returning to Hotchkiss, Mike was the director of hockey at Logitech Ice in San Jose, CA. While at Logitech, Mike was responsible for overseeing all youth and adult hockey programs, and he played a significant role in the development of the San Jose Jr. Sharks Hockey Club. Each summer, Mike returns to San Jose to coach at the Sharks Summer Hockey School. Former Bearcat Torrey Mitchell ’04 was a 2004 San Jose draft pick (Rd 4, #126), who played for the Sharks from ’07-’12.
Before becoming the director of hockey at Logitech Ice, Mike enjoyed a successful, but brief career in hockey. He attended training camp with the San Jose Sharks in 1995, prior to signing a contract in Italy. He played one season professionally in Italy before a knee injury forced him to retire. Mike is a graduate of Brown University, with a degree in business economics. He was a four-year member of the men’s varsity hockey team. While at Brown, he was named to the ECAC’s All-Rookie Team in his freshman year, the ECAC’s Best Defensive Defenseman in both his junior and senior seasons, as well as First Team All-Ivy, First Team All-ECAC. Mike was also the team captain his senior year, leading the Bears to an Ivy League title, and a top 10 national ranking during the season. In 2011, Mike was inducted into the Brown University Athletic Hall of Fame, recognizing his outstanding career at Brown. He is a Connecticut native and currently lives in Sharon, CT with his wife, Anna, and their 4 children.