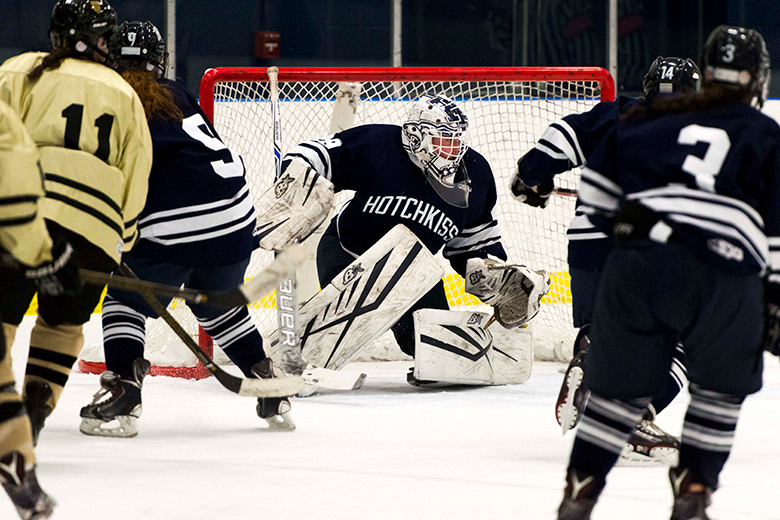 The girls’ hockey program at Hotchkiss has a long and successful tradition as one of the oldest prep school girls’ programs in the country. The team competes in the Founders League and New England Prep School Athletic Council (NEPSAC) at the Division One level with one of the most competitive schedules in the league, which includes a holiday tournament in December. The Patsy K. Odden Tournament features eight of the top teams in New England and is a fabulous opportunity for our players to be seen and evaluated by college coaches.

The program is committed to excellence in the classroom, in the community and on the ice. Representing Hotchkiss Girls’ Hockey means continuing a legacy of spirited competition, talent, and work ethic. While working to achieve our shared goals through the emphasis of respect, accountability and sportsmanship, we are most proud of our players appreciation for their balance of school and sport in their pursuit of becoming college student-athletes.

The varsity hockey team prides itself on its tradition of success and continued matriculation of its players to premiere college and universities. Players who are interested in learning more about the girls’ ice hockey program at Hotchkiss are encouraged to contact head coach Corey Cooper and complete the student-athlete profile on the girls’ hockey home page. We look forward to hearing from you!

The girls varsity hockey program has a long tradition of producing outstanding student-athletes. The varsity team has had tremendous success in past New England Division One playoff tournaments along with three appearances in the NEPSAC Division One championship game and numerous Founders League Championships.

The hockey programs at Hotchkiss have benefited from the state-of-the-art 212,000-square-foot Forrest E. Mars Jr. Athletic Center. Our athletic facility includes two rinks, the Thomas Schmidt Rink (NHL size) and the Andrew K. Dwyer and Martin Dwyer III Rink (Olympic size). The quality of our rinks and athletic facility plays a major role in the development of our highly skilled players over the years. This beautiful dual-rink facility allows the varsity and junior varsity teams to practice four times per week, play games, and complete their strength and conditioning programs and any necessary rehabilitation on site with our certified strength and conditioning coaches and athletic trainers.