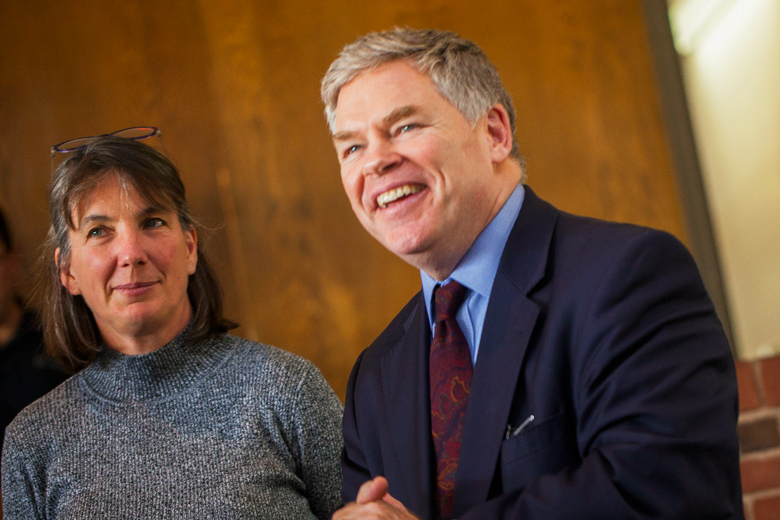 Beginning his tenure in July 2016, Craig Bradley’s career has been characterized by a commitment to creating inclusive residential learning communities of academic distinction.

Craig was raised in Winchester, Massachusetts, by parents who dedicated their careers to public education—his father as a biology teacher and his mother as a school secretary. After graduating from Winchester High School, Craig attended Dartmouth College where he received his bachelor’s degree in English cum laude. He actively participated in student life and outdoor activities at Dartmouth. As a sophomore in a Dartmouth Language Study Abroad program, he studied French language in Blois, France—an experience that made him a lifelong Francophile. He spent his junior year at University College London where he read 20th-Century literature and learned to play rugby. Among his many college activities, he counts serving as an Undergraduate (Residential) Advisor, chairing the Board of the Campus Center, and serving as an intern to the Dean of Freshmen as experiences that would later influence his professional career.

Craig received the St. Andrew’s Society of New York Scholarship, and attended the University of Edinburgh, where he received his master’s degree in English in 1983. He enjoyed spending his days at the National Library of Scotland studying Scottish literature and his weekends whitewater kayaking on rivers across Scotland.

Craig returned to Dartmouth as an Assistant Dean and Class Dean. He thrived in the role and enjoyed working with students and faculty to shape many areas of the campus experience—residential, athletic, extracurricular, service and social. Members of the senior class elected him their Baccalaureate speaker in 1990. During his years working at Dartmouth, he learned to make furniture and joyfully led many kayaking trips with the Ledyard Canoe Club. He met his future wife, Elizabeth Webb, a Dartmouth alumna and fellow kayaker.

In 1990, Craig was appointed the Dean of Students at Kenyon College in Gambier, Ohio, where he led the Student Affairs division of the College and guided the development of a more inclusive residential life program. Married just as they were moving to Kenyon, Elizabeth and Craig enjoyed living on campus, hosting countless student gatherings, leading many outdoor trips, and eventually welcoming their first child, Anna.

A call to serve as Dean of Student Affairs at Bowdoin College led them back to New England, settling in Brunswick, Maine—the place their daughters consider their (American) hometown. Laura was born at the end of their first year at Bowdoin, and they lived in Brunswick for another nine years.

The focus of Craig’s work and the work of his team at Bowdoin was to build community at a time when the College was struggling to evolve and meet the needs of a changing student body. Craig was firmly committed to building a residential learning community that was inclusive and that celebrated the many different cultures, backgrounds, and perspectives reflected on campus. The effectiveness of this work was evident in decennial surveys that measured student satisfaction with the sense of community at Bowdoin, a measurement that rose from 28% in 1996 to 88% in 2006.

What began as a voluntary engagement while at Bowdoin became the focus of his professional life for the next decade: working with the Aga Khan Development Network to plan and build a network of boarding schools in diverse areas of the developing world. In 2006, Craig and his family moved to Paris, France, where he led the program design and implementation of the Aga Khan Academies—a network of residential International Baccalaureate schools being built to provide high-quality education to girls and boys from diverse backgrounds who possess unusual academic and leadership potential. Aga Khan Academies are currently operating in Kenya, India, and Mozambique, and future schools are planned throughout sub-Saharan Africa, Central Asia, and South Asia.

Craig traveled frequently to sub-Saharan Africa and India where he worked closely with colleagues from a wide range of diverse cultural, linguistic, tribal, and faith backgrounds—an experience that has profoundly influenced his pluralistic sensibility. He found the process of planning and building new schools in environments where scarcity is a defining condition and quality is an elusive standard to be challenging and deeply rewarding.

As longtime admirers, Craig and Elizabeth are delighted to be part of the Hotchkiss community.

Head of School messages and multimedia

Board of Trustees and Leadership