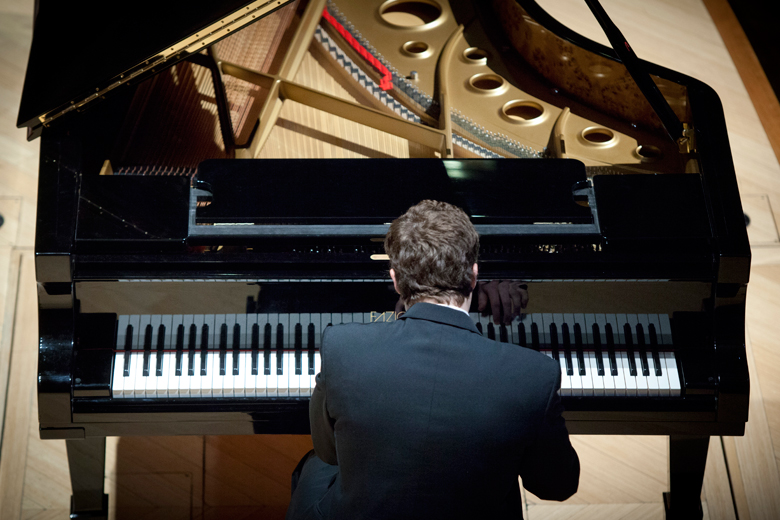 The Piano Program is an intensive, two-week course that offers young pianists an opportunity to work with highly accomplished teachers, perform on a world-class stage, and attend inspiring concerts by guest performers. Through one-on-one lessons, group masterclasses, and lectures, students will refine their technique, expand their musical repertoire, and discuss common questions facing young pianists who want to take their craft to the next level: the best repertoire for an audition or competition, healthy practice routines, and building a portfolio for colleges and conservatories.

A vibrant concert series is the culminating experience of Hotchkiss Piano Portals. Guest artist concerts are performed by the world-class faculty, while students perform in several Young Artists Concerts, held at the stunning Katherine Elfers Hall.

In addition to the performance opportunities on campus, the Hotchkiss Piano Program will bring a group of young pianists for a New York debut recital*. Students will be selected through an audition process held during the first week of the program.

Piano Program applicants are required to submit their application in two parts:

2. Fill out the application form for the Hotchkiss Piano Portals Program. Follow this link apply.hotchkiss.org/apply to submit the required information. 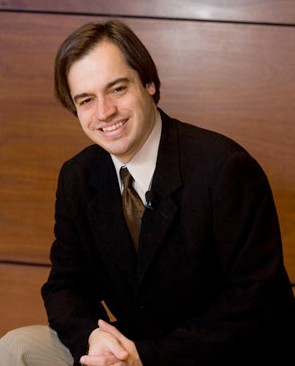 Fabio Witkowski is the program director of the Piano Portal. As both Chair of The Hotchkiss School Music Department and an accomplished professional pianist, Fabio’s commitment to developing musical students of all levels while simultaneously challenging exceptional musicians to continue to grow as artists and performers has made Hotchkiss a leader in attracting exceptional musicians and teachers. Fabio will coach piano ensemble, teach private lessons, and play a formal four-hands concert along with his partner and wife, Gisele.

He has performed at the Tanglewood Institute, the Liszt and Wagner International Festival, in Italy, the Prague International Piano Festival, Festival de Musica de Girona, in Spain, and the Liszt Festival, in Rio de Janeiro. For the past four years he has been a guest artist and piano faculty at the Amalfi Coast Music Festival in Italy, having shared the stage with renowned pianists such as Bobby Roux, Ian Robson, Luiz de Moura Castro and Paul Badura-Skoda. He appeared in chamber recitals with the Grammy-Award winning Emerson String Quartet, the Fine Arts Quartet, the Adaskin Trio, and with Mr. Robert deMaine, principal cellist of the Detroit Symphony.

Some of his past engagements include concerts at Bryant Park and Union Square Park, in New York City, both sponsored by the New York Times’s Young Performers Series. Mr. Witkowski also performs regularly with his wife, pianist Gisele Nacif Witkowski. They have appeared together in prestigious settings such as the Gardens of Villa Rufolo, in Ravello, Italy, at the Kennedy Center, in Washington, D.C. and at Carnegie Hall, in New York City. According to the New York Concert Review, the duo “shows marvelous rubato and tremendously clean playing, with a lovely sense of tone.”

Mr. Witkowski has been acclaimed by the critics as “One of Brazil’s most promising talents,” who “never fails to impress the audience,” and whose playing “is able to conjure up the devilish colors of an inferno as well as portray an ethereal paradise...” According to the Hartford Courant, “Mr. Witkowski revealed himself as an accomplished pianist, providing many passages of bravura, sensitivity, and pearly agility.” 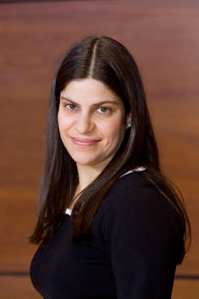 Critically acclaimed by the New York Concert Review as having given "the most genuinely fascinating recital debut in many a moon," for her New York solo recital debut at Carnegie Hall's Weill Hall, pianist Gisele Nacif Witkowski has been performing extensively throughout Brazil, United States, China, and Europe.

Mrs. Witkowski has performed in some of Brazil’s most prestigious venues. Sponsored by Funarte, she completed an extensive recital tour of northern Brazil, intended to promote the Brazilian piano repertoire, which included the capital cities of Brasília, Manaus, Boa Vista, Belém, Macapá, São Luiz, and Terezina. Other recital engagements have included the states of São Paulo, Paraná, Espírito Santo, Rio Grande do Sul, Minas Gerais, and the American states of New York, Washington, Connecticut, Pennsylvania, Wisconsin, Virginia, and New Jersey, as well as many performances in Italy and Czech Republic. Recent engagements included concerts at the Kennedy Center’s Millennium Stage, and at Union Square Park (NY), sponsored by the New York Times Young Performers Series.

She has appeared as guest artists and professor in several music festivals, including the Amalfi Coast Music Festival in Italy for 13 years, the Wintergreen Summer Music Festival and the Hotchkiss Summer Portals in the US, and the São João del Rey, Ourinhos, and Londrina Music Festivals in Brazil.

Mrs. Witkowski also performs regularly with her husband, pianist Fabio Witkowski, as the Witkowski Piano Duo. They have appeared together in prestigious settings such as the Gardens of Villa Rufolo, in Ravello, Italy, at Carnegie’s Weill Recital Hall, and at the Kennedy Center in Washington, DC, as well as several recitals in the United States, Europe, and Brazil. One of their latest projects has been to perform Stravinsky’s Rite of Spring with the Bowen McCauley dance company, celebrating the 100 years anniversary of this masterpiece. About this collaboration, The Washington Post said, “Fabio and Gisele Witkowski played the four-hand piano arrangement as if they possessed the very paws of Fate.”

Mrs. Witkowski began her piano studies with her parents at age four. She graduated from the Santa Cecilia Conservatory and received her Bachelor’s degree from the Santa Marcelina College where she studied with Daisy de Luca and Isabel Mourão. She became the first prize winner of several piano competitions including the "The Villa- Lobos National Contest" (ES), the "Soloist Contest" (MG), the "Eleventh Young Instrumentalists Brazilian Contest" (SP), the "Concerto Competition of the Santa Marcelina College" (SP), the "Young Soloists Contest of the São Paulo Symphony Orchestra" (SP), and was a recipient of the "Artists International's 1998 Twenty-Sixth Young Artists Piano Award" (NY), among others. She has also appeared on various radio and TV broadcasts including WQXR in New York and TV Cultura in São Paulo.

Mrs. Witkowski received a full scholarship from the Brazilian Government to study at the Manhattan School of Music with Ms. Nina Svetlanova, where she received her Masters degree. She holds a Doctor of Musical Arts Degree from the Hartt School of Music where she studied under the tutelage of Luiz de Moura Castro. She is currently a member of the piano faculty at the Hotchkiss School in Connecticut. Her piano students have received numerous awards in regional, national, and international piano competitions. 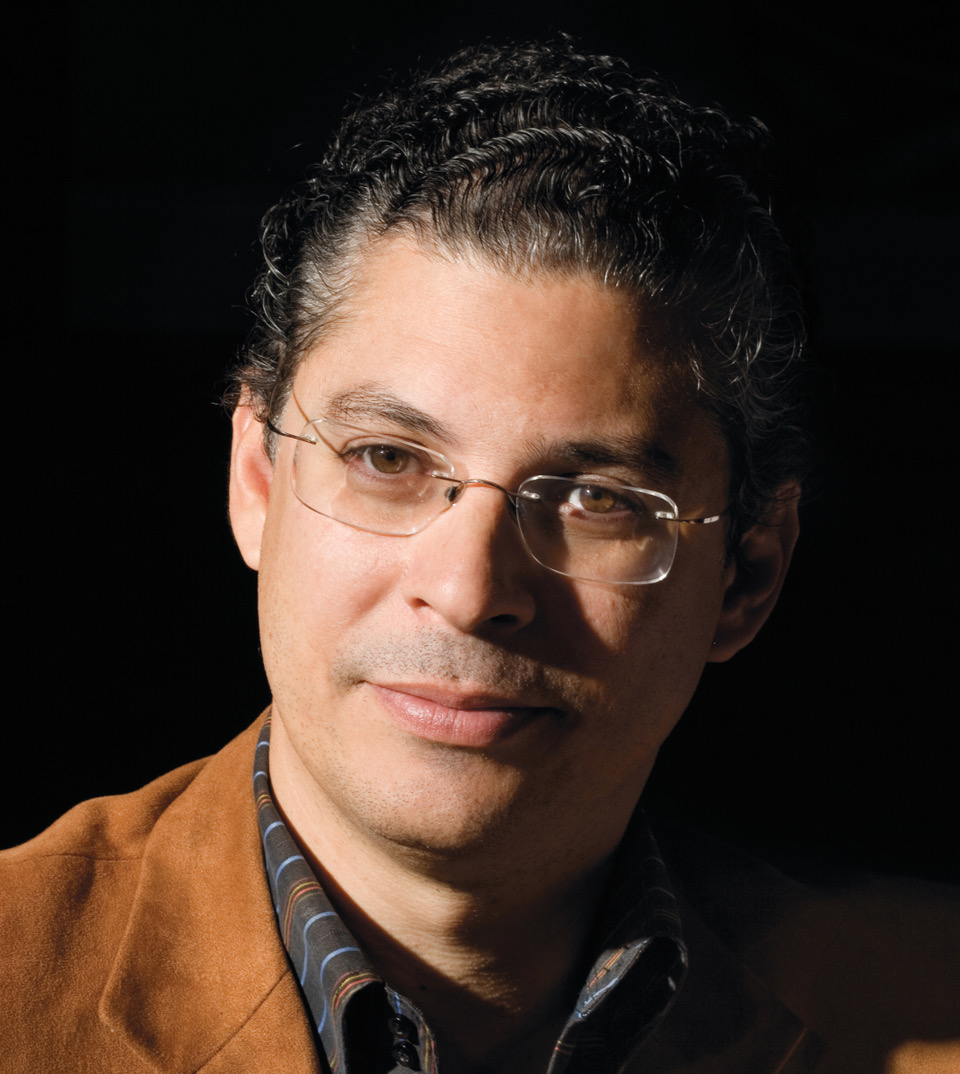 Born in Cuba, Leonel Morales has lived in Spain since 1991, where he has been awarded many international prizes, including First Prize in the Guerrero Foundation International Piano Competition in Madrid and the Second Prize at Jaen International Piano Competition. He graduated from the University of Havana where he studied under Frank Fernandez, a student of renowned Moscow Conservatory professor Victor Merzhanov, firmly establishing Mr. Morales in the Russian pianist tradition. A professor of piano at the Conservatorio Superior de Castellón, Spain, Mr. Morales has performed all over the world, including the Weill Recital Hall of Carnegie Hall in New York City. He has toured with various orchestras, including the Spanish National Orchestra, Spanish Radio and TV Orchestra, Royal Philharmonic of Galicia, Symphonic Orchestra of Bilbao, the Symphonic Orchestra of Hamburg, Frankfurt-Oder Orchestra, RAI National Orchestra of Turin, among many others. While on tour with the Spanish National Orchestra, he has been praised by The Washington Post for his “...extraordinary interpretation and power.”

Leonel Morales has become member of the “Academia de Bellas Artes de Santa Isabel de Hungría”, in Seville (Spain). He is probably one of the only pianists in the world to have performed all Rachmaninov concerti, including the Rhapsody on a Theme by Paganini, during two consecutive nights. 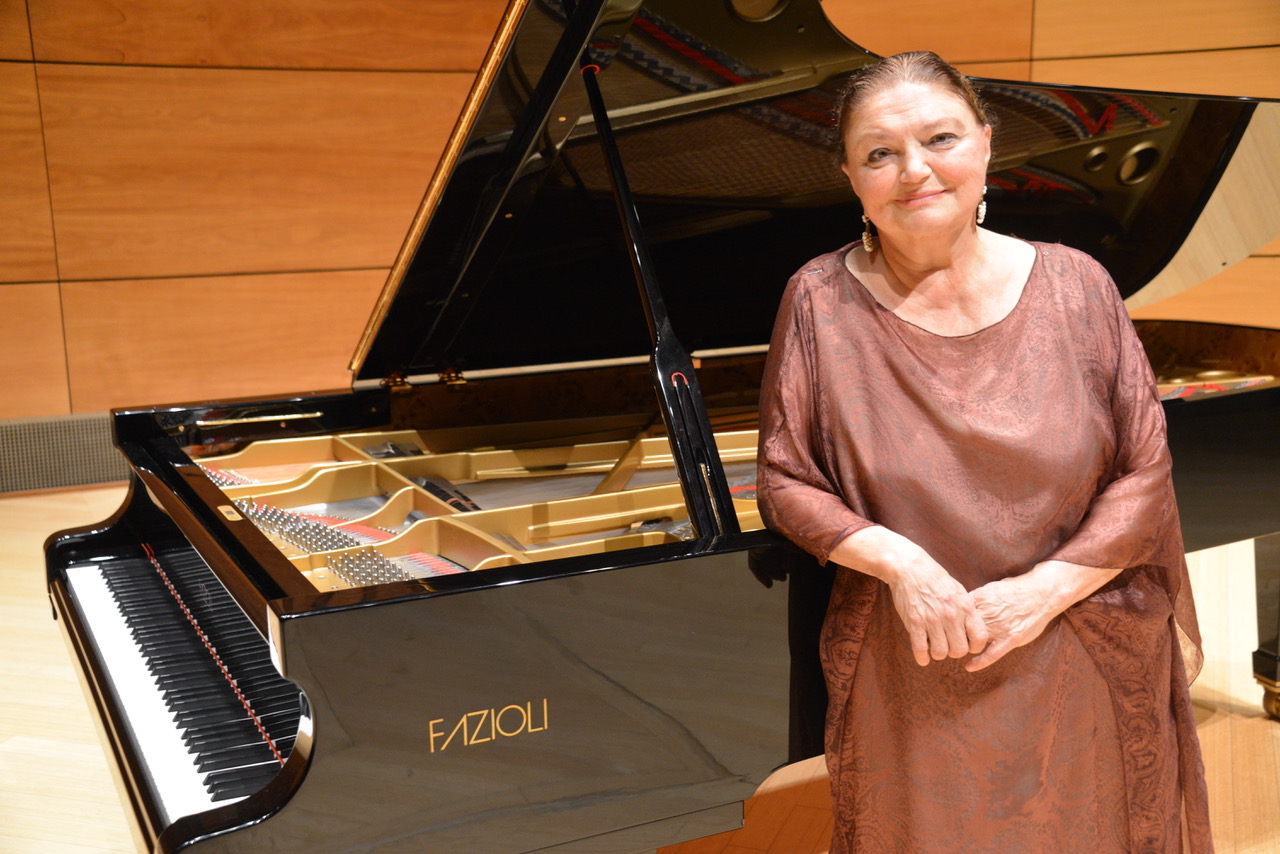 Oxana Yablonskaya is one of a number of hugely talented expatriate Russian pianists to have emerged from the post-World War II era. Yablonskaya possesses an all-encompassing technique and vast repertory that takes in works by Beethoven, Mendelssohn, Chopin, Liszt, Tchaikovsky, Mussorgsky, Scriabin, Rachmaninov, Prokofiev, Shostakovich, and many others. She has made numerous recordings throughout her career, including for Melodiya, Naxos, Connoisseur Society, and Classical Records.

Yablonskaya was born in Moscow, Russia, on December 6, 1938. A gifted child pianist, she studied at the Moscow Conservatory with Alexander Goldenweiser. She had later studies with Tatiana Nikolayeva. In the 1960s Yablonskaya captured prizes at three major competitions: the Jacques Long-Thibaud (1963), the Rio de Janeiro (1965), and the Vienna Beethoven (1969). Despite numerous concert invitations from abroad, however, the Soviet government forbade her from performing outside Eastern Bloc borders. Frustrated in her career, Yablonskaya applied for a U.S. visa in 1975 and was subsequently stripped of her professorship at the Moscow Conservatory and denied all concert engagements. In 1977, thanks in great part to a petition signed by Leonard Bernstein, Stephen Sondheim, Richard Rodgers, Katharine Hepburn, and other notables, Yablonskaya emigrated to the United States with her father and son, Dmitry. Her son would become the renowned conductor and cellist Dmitry Yablonsky, with whom she would make several recordings.

Later on in 1977 Yablonskaya gave critically acclaimed concerts at Alice Tully Hall and Carnegie Hall before capacity crowds. She regularly concertized thereafter, appearing in both recitals and as a soloist with major symphony orchestras across the U.S. and Europe. She soon began making recordings in the U.S., producing three highly praised albums for the Connoisseur Society label that featured music of Beethoven, Liszt, Mussorgsky, and Prokofiev. The Liszt recording was awarded a Grand Prix du Disque by the International Liszt Society.

From 1983 Yablonskaya has served on the faculty at Juilliard. In 1990 she created a near-sensation in her former homeland, giving several sold-out concerts and conducting master classes at the Moscow Conservatory. With the appearance in 1995 of volume one of the piano music of Tchaikovsky, Yablonskaya launched a series of highly successful recordings for the Naxos label.